With winter fully exerting its cold hold all over Canada, residences have to prepare for the occurrence of frozen pipes, one of the telltale signs of which is the absence of running water from taps. This signal demands immediate attention, as frozen pipes can bring a host of complications. Ralph Suppa from The Canadian Institute of Plumbing & Heating advises homeowners suffering from water issues to contact an emergency plumber in Newmarket or in other towns in the country.

“Suppa said if homeowners have power but suspect their pipes are frozen, he strongly recommends not tampering with them and calling a plumber. He said there have been instances of consumers trying to heat pipes on their own, which can, in turn, cause more damage.”

More than the guidance that the recommendation offers, property owners who will heed the suggestion will also be cautioned against the dangers of undertaking the issue of a frozen pipe on their own. After all, a frozen pipe is not only a hindrance to regular water flow; it also presents a plethora of unpleasant possibilities such as leaks and bursts. 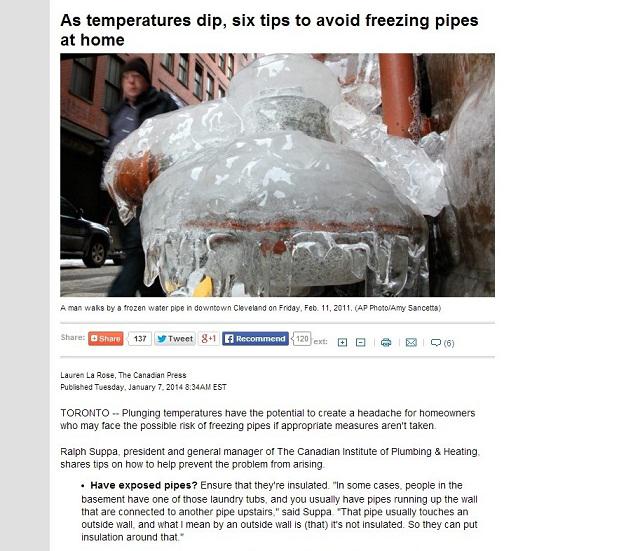 Trusted plumbing companies such as Harris Plumbing can minimize the ill effects of frozen pipes on people’s convenience and safety. These trained professionals are equipped with the technical know-how and experience critical to addressing the issue at its root, and subsequently reducing the risks for more complicated problems.

In addition, professional plumbers have the equipment and tools for the job. They can easily identify the source of the blockage, remove it, and fortify your pipes to prevent similar occurrences in the future. In this way, consumers can save on costs, and make the most out of their plumbing systems.

Another advantage that comes from entrusting plumbing needs to a professional plumbing and drainage contractors in Barrie and in other areas is that they are qualified to oversee other concerns relating to pipes. Companies such as Harris Plumbing employ a staff with comprehensive skill sets, and they are committed to educating their clients toward getting more rewards from their services. Homeowners will receive pointers on keeping their water systems well-functioning all throughout the season.