Winter can cause many problems for your home, and one of the most common is frozen water pipes

If you suspect you have a frozen pipe, you must locate the blockage and defrost it as quickly as possible. 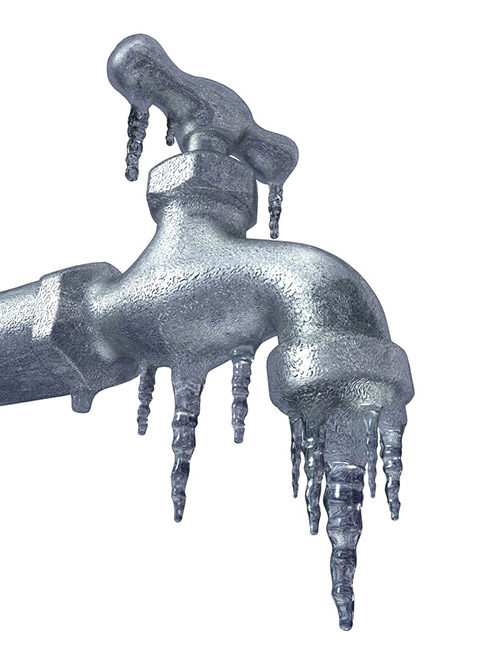 Water expands when it freezes, and the force it exerts is often strong enough to make a pipe bulge noticeably. Visually, a frozen pipe may also have a layer of condensation or even small cracks on its surface. If you notice any of these signs, you have likely identified your frozen pipe.

If there are no visual clues, use your hands to feel along your pipes to check for sections that feel colder than the rest. You may need to compare the temperature of the frozen pipe to that of a pipe in an area where water is flowing freely. You may detect multiple frozen areas within a single water pipe. This is common, especially in pipes that run against exterior walls.

Once you have located the blockage, turn off the main stop tap and open the faucet closest to the pipe that has frozen. This will allow the water in the frozen section to flow away when it melts.

Starting at the end nearest the faucet, carefully thaw the frozen section of the pipe using a hairdryer, heat pad or towel doused in hot water. Watch the open faucet, as water will start to flow through it as the pipe begins to thaw.

Inspecting the Pipe for Signs of Damage

Once you have thawed out the blockage, check your pipe thoroughly for any signs of damage. If the pipe has been damaged, contact our plumbers in Barrie, Orillia, Muskoka, Huntsville, Aurora, Newmarket, and Georgina to repair and fix the problem.

Following restoring normal water flow, you must take steps to prevent your pipes from freezing in the future. One way to prevent frozen pipes is to instruct a plumbing company to relocate your pipes to an area where they will be less prone to freezing. Another is to insulate your pipes with pipe sleeves or foam lagging from a DIY store and plumbing merchant.