The worst of Toronto’s winter season may be well behind the minds of most people, but they won’t forget the 2nd coldest winter in 25 years that they experienced. Toronto news radio station 680News recounted the terrible weather that characterized the first week of March 2014. The 3rd of March, in particular, saw about -12°C in wind temperature even after the wind chill warning was lifted from the city. 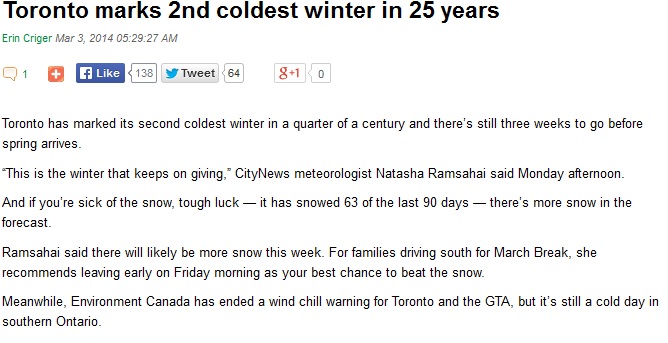 Such conditions are typically bad news because they can cause all sorts of problems to household plumbing systems. The most glaring of these is frozen water pipes, which is something that homeowners in Winnipeg and other Canadian cities experienced at the peak of winter. In fact, about 5,000 properties in Winnipeg alone suffered from or at least were at risk of, frozen pipes right around the same time the Greater Toronto Area was also facing extremely cold weather.

The situation in Winnipeg prompted plumbing services and utility crews to work double-time to fix compromised pipes; almost day-in and day-out. Assuming that something like this happens in Toronto or other places in Ontario like Barrie and Newmarket, people should keep in touch with the best plumbers just in case. Harris Plumbing Inc., in particular, can send in a reliable Newmarket emergency plumber who can fix frozen water pipes at a moment’s notice.

Basically, water pipes freeze when the water inside them turns to ice due to cold temperatures. This may sound like nothing worth fussing about, but frozen water inside pipes is actually detrimental to your home because the resulting pressure buildup can cause even the strongest pipe material to burst. Since the interior of all water pipes is always wet, ice formation is all but inevitable. The only way to prevent this from happening is to insulate the pipes during winter, either by wrapping them up with a warm blanket or by activating the heater.

Even then, it is still a good idea to contact a Newmarket emergency plumber for assistance because thawing the ice won’t undo the small damages that may be present on the pipes. To detect these damages, homeowners should turn a faucet on and see if one section of the pipes will spring a leak. There is also the fact that repairing water pipes as a DIY project may do more harm than good, considering that not all people have basic home construction and plumbing skills.

Thankfully, though, such matters don’t need to be taken too seriously, at least up until the next winter season comes – and you can always count on a dependable emergency plumber in Ontario.