Aurora Plumbers: Pumpkins and Their Pulp are Not Plumbing-Friendly

Did you have pumpkin during Halloween? How did you dispose of its pulp after the festivities? Please don’t say you dumped it down your drainage system, because if you did, you could be setting yourself up for some plumbing horrors in the near future. A Plymouth Herald article describes what could happen in this yearly practice:

THERE could be a dark – and smelly – side to carving your pumpkin this Halloween, say experts.

But they are also leading to some terrifying plumbing bills for some households.

Many people wash the sticky waste from pumpkins down the sink.

But be warned – when pumpkin pulp enters the drains, the orange flesh hardens and sticks to the pipes, leading to blockages.

Each year, over thousands of tonnes of pumpkins are produced in Canada, many of which are carved into jack-o’-lanterns during the Halloween season. That’s a lot of leftover pulp! As you can imagine, most homeowners get rid of their excess pulp through their kitchen sinks, and that’s why many Aurora plumbers spend several autumn days removing pumpkin pulp from clogged household drains long after the Halloween season has ended. 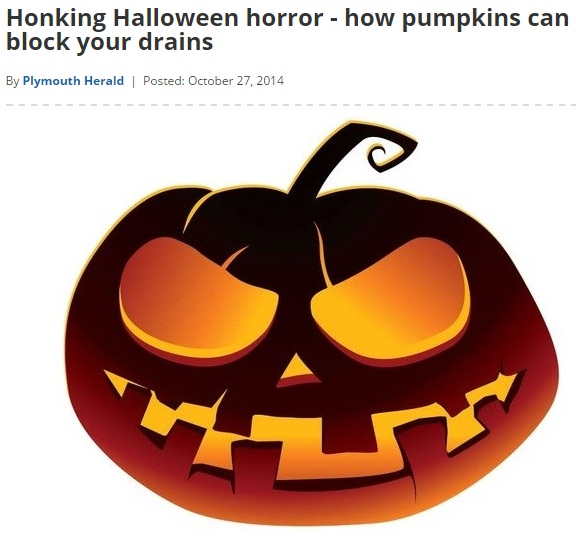 Is your drain clogged yet?

If pumpkin pulp is now coursing through your plumbing pipes, no need to panic yet—there are steps you can take to prevent clogs from happening. One very effective tip is to pour ½ cup of baking soda down your sink, followed by ½ cup of white vinegar. The two will produce an acidic reaction that would eat away at the pumpkin pulp that may have accumulated down in the pipes. After a few minutes, follow this up with a cup of lemon juice to eliminate any foul odor from the drain.

What if it’s already too late?

The sooner you can take care of a clogged drain, the easier the problem would be to deal with. Drains clogged by pumpkin pulp tend to become worse the longer you leave it alone—pumpkin pulp will dry, harden, and choke off drainpipes, eventually creating all sorts of plumbing disasters. That one small clog you have today? That could become an extensive and expensive plumbing repair in the future.

If you’re having problems with your plumbing lines, have them inspected by a licensed Barrie plumber as soon as possible.