Recently, the use of so-called flushable wipes has been identified as one of the growing causes of sewage problems. According to waste water utilities across Canada, these personal wipes create “putrid sewage clogs” that cost ratepayers a big amount of money. The Canadian Press reports on this subject in an article for Huffington Post Canada: 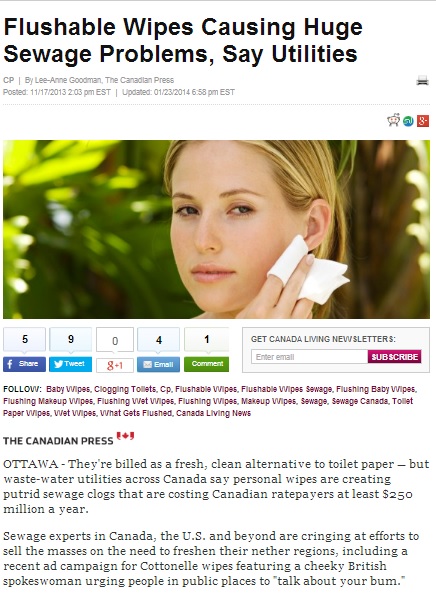 “Sewage experts in Canada, the U.S. and beyond are cringing at efforts to sell the masses on the need to freshen their nether regions, including a recent ad campaign for Cottonelle wipes featuring a cheeky British spokeswoman urging people in public places to “talk about your bum.”

Manufacturers, meantime, say the wipes are getting the bum’s rush from waste-water officials and are perfectly safe to flush.

Nonetheless, the Municipal Enforcement Sewer Use Group (MESUG), comprised of 25 Canadian communities, wants a federal standard to ensure more honest labelling of the wipes and other products that they insist are not safe to send down the toilet.”

More than the financial amount that residents have to pay, the environment can be harmed by sewage clogs that may arise from flushing non-disintegrating wipes. Too much clogging can cause sewage spills into creeks, rivers, beaches, and other bodies of water. These spills can pose hazards to the health of swimmers, as well as to the ecology of the affected water system.

Homeowners in Barrie, Aurora, and other places in the Ontario province can do their share in preventing such far-ranging environmental hazards. For one, they can avoid flushing non-disintegrating objects down their toilets or their drains to avoid sewage clogging. Additionally, they can keep their Aurora or Barrie plumbing systems in good condition with the help of experienced plumbers, such as those at Harris Plumbing North, Inc.

Regular inspections of Barrie or Aurora plumbing systems will help guarantee their efficient condition at all times. Not only can a good sewage system help preserve the environment, it can also protect residents from diseases that may arise from clogged sewers.