Ice Attack: On Hiring a Skilled Plumber in Barrie to Fix Frozen Pipes

The CTV News website has a feature dated January 7, 2014 that discusses the dangers of frozen pipes and how homeowners can prevent their plumbing from freezing. The recent winter that struck the nation is one of the coldest in recent memory, so it’s not surprising to find many water systems frozen in place. The article dispenses the following advice regarding icy pipes: 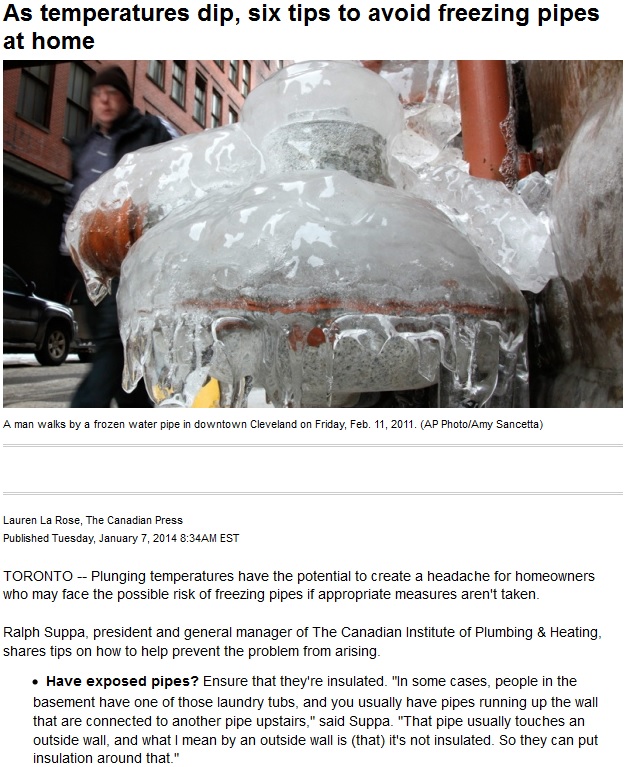 Many homeowners may elect to thaw their own pipes, yet such actions aren’t recommended. Attempting to melt the ice with a blowtorch or similar tool will warm the pipe too quickly, and could lead to a rupture. To prevent making the problem even worse, homeowners should rely on an experienced licensed plumber from Barrie to solve the problem.

While waiting for the plumber, homeowners can try some quick fixes, such as pouring warm water over pipes wrapped with burlap or similar covering; or applying low heat, using such sources as a hair dryer.

Typically, the water within pipes freezes if it’s left to stand still and if the pipe itself is exposed to the cold without any form of insulation or heating. Homeowners shouldn’t let the freezing go unattended, since a serious icy buildup will expand the solid water, which could lead to burst pipes. A capable plumber from Newmarket such as Harris Plumbing can safely and thoroughly defrost the blockage in pipes, as well as detect and repair any bursts that have ruptured along the line to prevent further damage.