The Water Hammer: Dealing with a Typical Concern in Aurora Plumbing

Typical Aurora plumbing fixtures deal with a lot of problems: backed-up toilets, clogged pipes, etc. But there’s one concern that literally makes its presence felt with a bang: the so-called water hammer. An Old House Web article provides a rough explanation on how it happens:

When you shut off a faucet, all the water that has been pouring into the sink or tub suddenly has nowhere to go. It just stops. That “hammer” creates a shock wave, causing a momentary spike in water pressure and making an unsettling bang that reverberates through your plumbing.

Water hammers are named for the characteristic noise they make. Water traveling faster than the speed of sound has enough pressure to bang against the steel, which usually happens when a faucet is shut off or when there’s a rapid change in direction. The pressure in water hammers can reach levels as high as over 1000 pounds per square inch, and can cause severe damage to the system if left unattended over time. 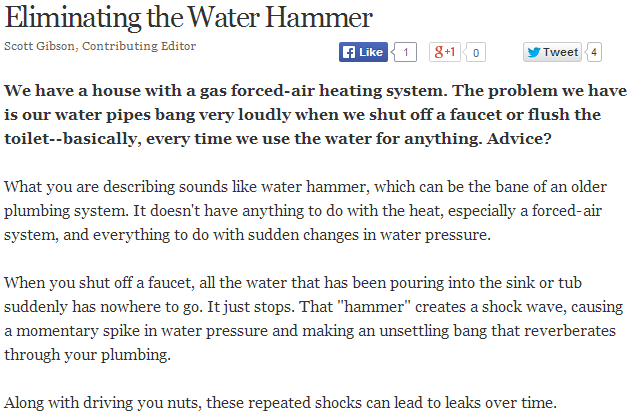 For homeowners who have never had water hammers before, the first instance of this problem can be extremely disconcerting. In these cases, the plumbing system’s air chambers are likely to be filled with water. One recommended “first aid” intervention involves turning off the water supply behind this waterlogged chamber, which in turn opens the offending faucet and permits water to drain. This should also be done alongside opening all of the faucets throughout the house as a way to relieve more pressure.

On the other hand, homeowners without air chambers built into their plumbing systems have to act much faster. One method for fixing water hammers in these systems is to lower the air pressure. This can be done by having a special pressure-reducing valve installed on the water supply line leading into the house. Lowering water pressure can also be achieved by installing a globe valve at the head of the affected pipe assembly. However, several issues might manifest if these remedies are done the wrong way: lowering water pressure has the tendency to go too far, causing lower-than-normal water pressure which can result into supply problems throughout the household.

Water hammers aren’t just noisy; they can also lead to several complications if not attended to by capable professionals from local Barrie plumbing companies like Harris Plumbing, Inc. to fix problems as soon as possible.