For as long as there has been plumbing in Aurora, many citizens have been under the impression that it serves as a garbage disposal as well, able to process solid objects and hazardous substances. Based on what has been found in city drainage systems, this seems to hold true. An article sponsored by Washakie Renewable Energy and posted on a KSL website lists everything we shouldn’t throw down the drain.

According to the Water Environment Federation, every American produces an average 150 gallons of wastewater per day. Water (and other stuff) that goes down the drain flows through underground pipes into a wastewater treatment plant (if the home is not attached to a septic tank). The treatment plant uses filtering technology and substances to clean the water and make it safe for drinking. But that system can be disrupted by the presence of certain substances — those that you might be unwittingly tossing down the drain. 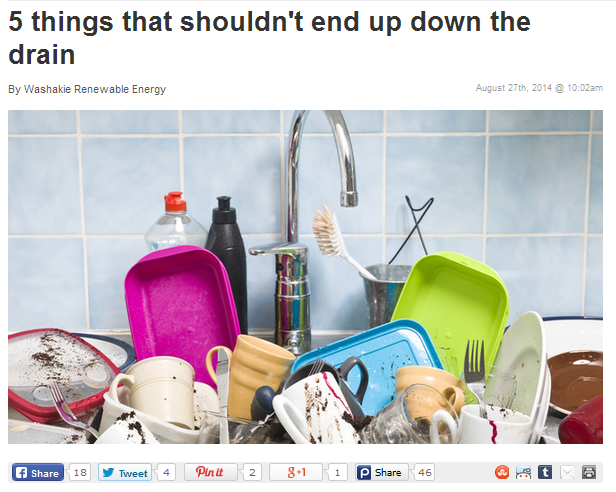 Leftovers from the kitchen
One of two areas of any household that is a source of grease and oil (the other being the garage), the kitchen produces organic waste such as butter and animal fat. When these get into the drainage system, they tend to solidify and cause blockage in your kitchen sink as well. Likewise, organic waste such as eggshells, coffee grounds, rice, starchy vegetables and the like do not degrade and can stop up a drain.

Toxic waste
Sounds like something from a science fiction story, but the danger is definitely real. Anti-freeze, petroleum products, cleaning chemicals, pesticides, paint, etc. should be disposed of properly, with the assistance of community officials. Many localities have a scheduled hazardous material collection or a drop-off point.

Garbage
As mentioned earlier, the public in general thinks that toilets or bathroom sinks are garbage disposals. The sad reality is that adults are just as guilty of improper waste disposal in the bathroom as the children, according to experts like Harris Plumbing, Inc., which have had to deal with undoing the damage this practice has caused. The article continues:

It may seem like a no-brainer, but garbage items should never end up down your drain. These include certain “bathroom” items like tampons, sanitary napkins, condoms, cotton balls and diapers. Other common offenders are cigarette butts and hair.

You shouldn’t wait until Newmarket plumbing systems get so clogged that your lives are disrupted. People need a wake-up call to remind them that anything inappropriate they throw down the drain will come floating right back to them in a flash flood or out of a clogged drain.