The city of Kenora isn’t doing well in staving off the effects of the bitter winter cold, now that its water supplies have been disrupted. As reported by Grace Protapapas in Kenora Online:

“Extreme temperatures have pushed the frost deep into the ground this winter. As a result, the city is experiencing significant levels of water main breaks and frozen water lines that have crippled the system.” 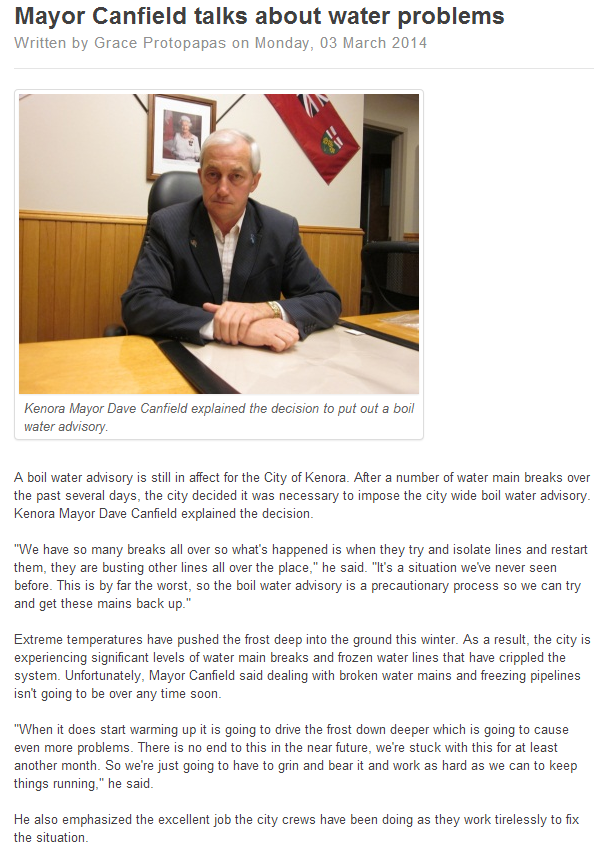 A “boil advisory” is necessary to combat any pathogens that may have contaminated the city’s drinking waters through the busted pipes. It would not be surprising if some areas in Toronto, like Newmarket, would receive a similar advisory, considering that the city is experiencing its second worst winter in 25 years. At the first sign of water problems or frozen pipes, Newmarket residents shouldn’t hesitate to call on a trusted Newmarket emergency plumber, such as one from a reputable plumbing contractor like Harris Plumbing Inc.

Homeowners can do their share in preventing broken pipes. If they notice any indication that their pipes are freezing, such as slow water delivery, they should immediately inspect their pipes for ruptures. Frozen water can exert up to 2,000 pounds of pressure per square inch and cause most kinds of water pipes to break.

It usually takes some time before this can take place, however; so if homeowners  see signs of freezing pipes but no ruptures, they can try to thaw the pipes on their own. However, they should only use safe equipment, such as infrared lamps or conventional heaters. Torches and open flames are greatly discouraged. On the other hand, a ruptured pipe is best left in the hands of a professional.

The task of fixing a frozen pipe doesn’t just end there. Reputable Barrie drain contractors should also be called on to ensure that all traces of frozen water are removed from the plumbing system. Homeowners’ efforts to maintain their pipes and drains during this extremely cold winter can go a long way to helping maintain the city’s water supply system. The folks of Kenora already know this too well.