Many Canadian residents may be in danger of consuming unclean water from contaminated sources, with concerned groups blaming what they perceive to be insufficient water protection efforts from the federal government.

Referencing the Walkerton, Ontario drinking water tragedy that led to severe health consequences for many in the area, a new report from the environmental group Ecojustice was released and featured in The Huffington Post:

The tragedy prompted most provinces to review and revamp their drinking water laws with mixed results — but that burst of enthusiasm has faded in recent years, according to the report.

“In many places, the health of Canadians is still at risk,” the report concludes.

“The lack of recent progress also seems to indicate that the impetus for improved water protection, spurred by events like Walkerton, is on the wane. 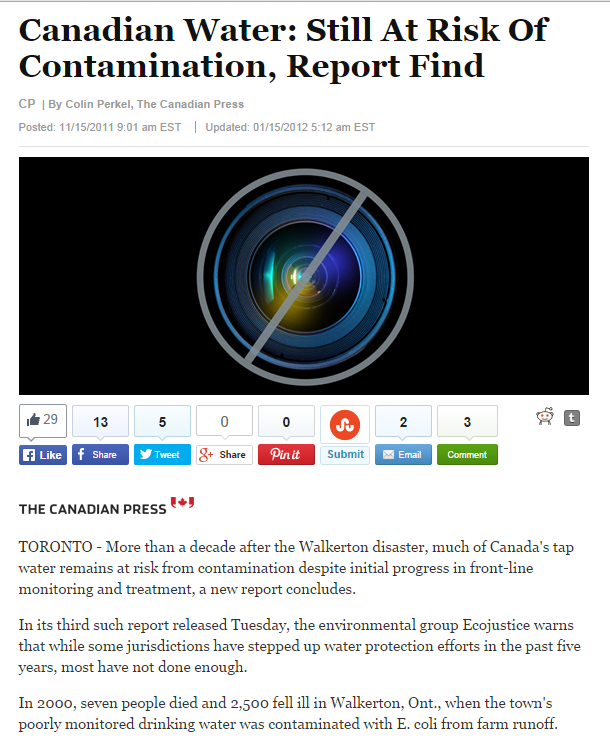 Drinking and using contaminated water poses a significant health hazard for people of all ages, and while water protection efforts are ongoing throughout the country, vigilance must be observed especially in residential homes. Hiring a Newmarket emergency plumber, for instance, is a wise course of action if changes in the water condition such as colour, taste and smell are observed in the area.

Besides securing plumbing, making sure that drainages work properly could also reduce risks. Locals in the region should call Newmarket drain contractors to determine if their drain system is properly disposing of sewage and other wastes, thus ensuring they do not get into contact with contaminated water sources. UV and water filtration, which reputable plumbing companies like Harris Plumbing Inc. offer, can also provide an added layer of water protection.

With water being one of the most basic requirements for survival, proper testing and treatment are important concerns for both the federal government and environmental groups. Protecting water sources and implementing legislation for continued maintenance is a front-line priority to safeguard the health and safety of all Canadians.
(Source: Canadian Water: Still At Risk Of Contamination, Report Find, Huffington Post)